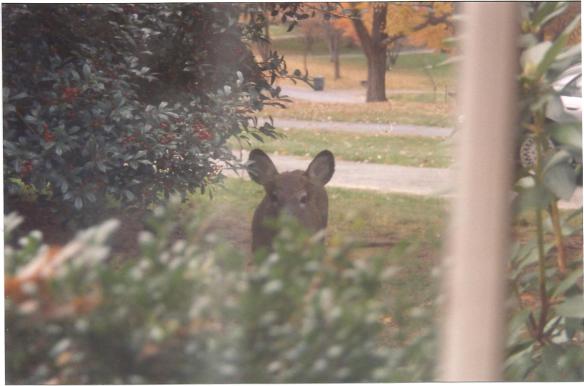 Deer Peaks in the Kitchen Window at Ancient Oak

After decades of driving, I have found that my ability to avoid hitting deer and other animals on the road has been tremendously enhanced by the simple act of slowing down. Our speed limits are set for our convenience, but the speeds we drive at make it impossible to avoid hitting animals, and other people for that matter.

My first suggestion is to make a “Conscious Intention” to slow down (obviously stay in the right lane to do this) and make it a “Priority” to avoid hitting wildlife.

Then you have to turn off typical distractions, such as cell phones, I Phones etc. The obsession we have with electronic gizmos while driving is severely dangerous and should NOT be a habitual part of anyone’s driving. How many times have I seen people looking down texting, drifting off in a cell phone conversation and speeding obliviously along the road. I see this all too often.

If you see any animal by the side of the road, assume they might run out. Don’t wait for the last minute when they run…anticipate it…and slow down…and be prepared to stop.

At night, you can see the reflections of an animals eyes as they glow in the dark. Those shining bright objects hovering in the dark woods, could be an animal and not just a beer can reflecting in your headlights.

Any where there are woods, there are bound to be wild animals. Assume that at some point an animal might run out. Always look for places where animals are likely to cross the road. If you drive past an area where you often see animals that have been hit and killed – slow down in that area. You are driving where they need to cross! Often I see where racoon families have all been killed together.

In the autumn, deer our mating and are likely to run onto the roads. During the autumn months many deer are killed by automobiles. To save your own life, and that of the deer, make certain to slow down and maintain awareness during the fall.

If we shift our attitudes away from viewing the deaths of wildlife as just “road kill’, and if we view their lives as important, and worth honoring, then we have taken the first step in avoiding them on the roads. One of my passions is teaching people that all those creatures we share the planet with don’t enjoy being hit and left to die on our roads. They would deeply appreciate it if we would view their lives, daily journeys and crossings as sacred.

This site uses Akismet to reduce spam. Learn how your comment data is processed.