I believe that one of the most important things that we can do to create a greener more humane world is to develop land and build in far more harmony with the earth and wildlife. Over the last several decades the emphasis has been on high density development and developers and city planners rarely leave any green space and forest for deer and many other species of wildlife.

In the area I grew up in, Montgomery County Maryland, I have seen forests, meadows and green spaces be systematically paved over for houses, shopping centers and highways. The deer and other creatures were driven to try and live in fragmented habitat that leaves them among the suburban houses. Then the intolerant people who now live in fancy houses on the animals habitat complain and often have no compassion or insight into the fact that they are 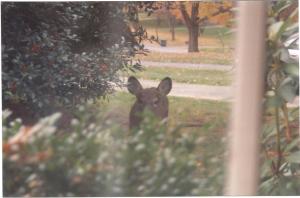 living where the animals once roamed and fed.

The amount of ignorance about nature and wildlife is growing as people live with nothing but electronics, apps, I-Phones and Plasma TV’s. What do they know about the creatures and what the creatures are trying to show them? I have seen the violence and anger at the deer escalate to intense degrees. And mass killing of deer is used as a failed attempt at restoring our forests and green spaces.

At all levels of government we need to have some type of governing laws that say “let’s keep half this area in a natural state – and leave forest and green areas for the wildlife”. But that rarely happens and the imbalance that grow as the result of this type of “let’s shove as much development as we can into this space” leaves little to the imagination and leaves the animals with severely fragmented habitat – if any habitat.

In the next post – we will look at more ways we can save green space for people and wildlife.

This site uses Akismet to reduce spam. Learn how your comment data is processed.